“I’ve been given many gifts of the heart over the years.First, the love and support of community, then the ability to learn and understand a bit more about plant and tree life. I’ve learned to interact with plants and trees and to appreciate the gifts they give us every day. It is a gift to be able to grow food for myself, my family, and to offer this food to others. As I age, I experience the natural world and all its inhabitants as deeply interconnected. I’ve learned so much by growing food and paying attention to plants and trees.” 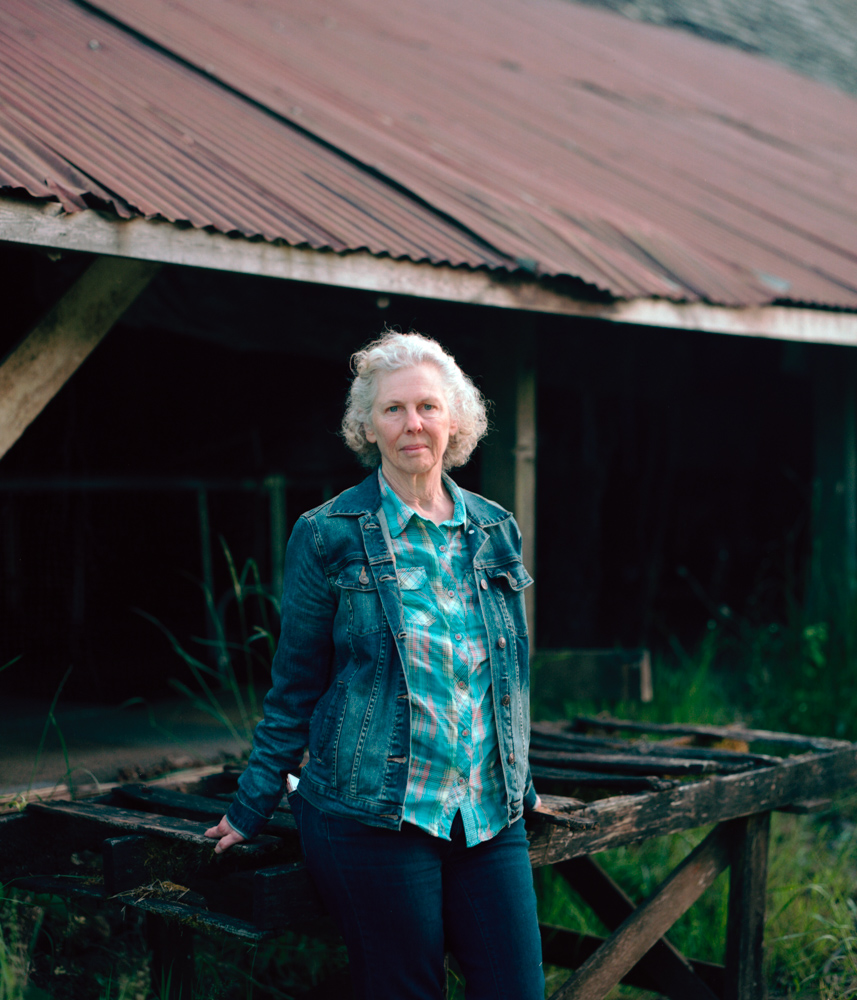 Lyn Hertz: I remember in those early years wanting to live in a co-housing type of situation. I always wanted to live with people. Being with people who are interested in, interested in sharing their lives, in a close way with other people, whatever those needs are. Knowing that I can call on them and knowing that they know they can call on me, and I'm available to help.

Elaine Vradenburgh: Our story today is about community – how it shapes us, what it can teach us, and how it can hold us in times of grief. Today we visit with Lyn Hertz. When I learned that Lyn was the first organic farmer in the region, back before our beloved Olympia Farmer’s Market existed, I was eager to hear her stories of those times. At the heart or center of Lyn’s memories are family and community, and the tragic loss of her husband, Steve, who was killed in a car accident in 1979.They had been farming for just a few years at the time and were raising two daughters Elizabeth, who was an infant, and Jenny who was an two. Community always has been a cornerstone for Lyn. It has provided comfort, stability and a sense of belonging, and it held her close during this time of intense of grief and loss. Her deep love of community grew from her early experiences in Greenbelt,Maryland in the early 1950s. Here’s Lyn.

Lyn Hertz: Greenbelt was one of the very first, if not the first, post-war planned community, which was like a heaven for children. All of the major streets either had overpasses or underpasses to walk on, so kids could go anywhere without parents worrying about them crossing streets, and I just love dit.

It was such a warm, loving community. All the parents knew all the kids. I know I felt, and I think most kids felt like they could go to anybody's house and get help if they needed it. And I really think that was the beginning of my really deep love of community. I think that's vital, I think that’s vital for well-being.

When I was in high school I had a geography teacher who everybody loved, except some of the parents who didn’t trust him. Every summer he would take station wagons full of his students and he'd have college students driving. We would go cross country and camp and he 'd show us places and talk about the environment. We got to the west coast and it was like, wow, this is really beautiful and really alive. And that was the seed, that was the seed.

Elaine Vradenburgh: Lyn attended college in Maryland and made her way out west to Eugene with some friends after she graduated. It was in Eugene where she met her late husband Steve. Together they moved to Seattle and got married. Lyn and Steve saved the money they would have used on a large wedding for a down payment on a farm.

Lyn Hertz: When I was a kid, when I saw myself as an adult, I always saw myself as living in a small house. If it was a log cabin, that'd be even better. And it would have a beautiful yard with lots of flowers and it'd be in the country. That was my dream house.

We had both previously lived in Oregon, and we both really liked it, so we were heading back to Oregon. And the first day of our trip we stopped in Centralia, went to a real estate agent there kind of on a whim. And this lady showed us this 20 acres and a falling down house and an even more falling down barn. And Steve fell in love with it. And I was like, “Yeah, but we're on our way to Oregon, remember?” And he's like, “Yeah, but this is so perfect.”

People were surprisingly friendly. Once they saw we were serious about farming that was our ticket in because they respected that so much.

We really were the first organic farm in that area. And when we’d grown enough crops to actually truck them to the farmers market, we had to go out to the Aberdeen farmers market because there wasn't an Olympia Farmers Market yet. It was very new. It was very much like, oh, you can't do that. You know, everything will get eaten up by bugs and it won't grow well. I think it was kind of a curiosity to our neighbors, like, “Oh, yeah? What does that mean?What does that even mean?”

I think that Steve probably had a bigger passion towards it. But I also know that I was very interested in natural living. I think we felt like we were offering really healthy food. And the idea of raising kids who would mostly eat organic food was very appealing to me.

So I think the dream was just that we were a family, who was going to be doing this wonderful work.

Elaine Vradenburgh: Steve and Lyn supplemented their income doing side work off the farm. Steve was killed on his way home from work in 1979. Their two close friends, Debbie and Jim, were a central source of support and the community around her grew as she continued to farm without Steve.

Lyn Hertz: I remember this beautiful sentiment. Debbie was in the house and I told her what had happened. And then when her husband Jim came into the house,she turned to him and said, “Steve left his body today.” And that's really what happened. He left his body.

I remember sleeping there that first night and being awoken by sensation of really deep impact. Like, I felt like I'd been hit. And I don't remember a dream or anything, but I think I was imagining or feeling the impact that Steve felt.

And really, that's when community really, really, really came into play for me. I mean, oh my gosh. People were so so caring, so loving. People coming by all day long bringing food or whatever.

My mother was pretty sure that I was gonna have to move home with her because how could I possibly stay here by myself with these two babies? And after she'd been there for a while and could really see and feel the community, she's like, I think Lyn’s gonna be okay.

After Steve died I wanted to continue the farming, but I have these two children, one's a baby. I contacted whoever it was that was in charge of the organic farm at Evergreen. I knew they had internship programs for those students, and so I just put a notice up, seeing if anyone would be interested in spending a year doing an internship, working the land that was already growing food.

The first year I had a really sweet couple and they were great.And then the second year another couple, Robin and Lou Jones, came and then they asked if they could move there and take over the farming. And I was like, yeah, you can do that.

They introduced me to another couple who were friends of theirs.And they said, “You know, Pat and Betsy would like to move here too.”

Elaine Vradenburgh: Lyn moved to Olympia when her daughters were 8 and 10, and Betsy stayed. Betsy continued to grow vegetables and flowers on the land as IndependenceValley Farm until just a few years ago. In reflecting back on her short time asa small farmer, Lyn said she received many, many gifts of the heart.

Lyn Hertz: The community and the love and support that I experienced therefrom the people. And then the gifts of understanding a little bit more about the land and the things that grow are just as much a part of us as we are of them. And that it's a whole huge cycle of life. Just the oneness of everything.And that you can learn so much by growing food.

Elaine Vradenburgh: The Third Thirty was produced byWindow Seat Media. It was a collaboration between Lyn, Amanda Mackison who edited this story with me, Molley Gillipsie, who photographed Lyn for our website and exhibit, and Nick Rawson, who composed music for this story. Funding for thiss eries was provided by The City of Olympia, the Freas Foundation, and the Thurston County Heritage Grant program. To learn more about Window Seat Media and hear more stories, visit www.windowseatmedia.org.