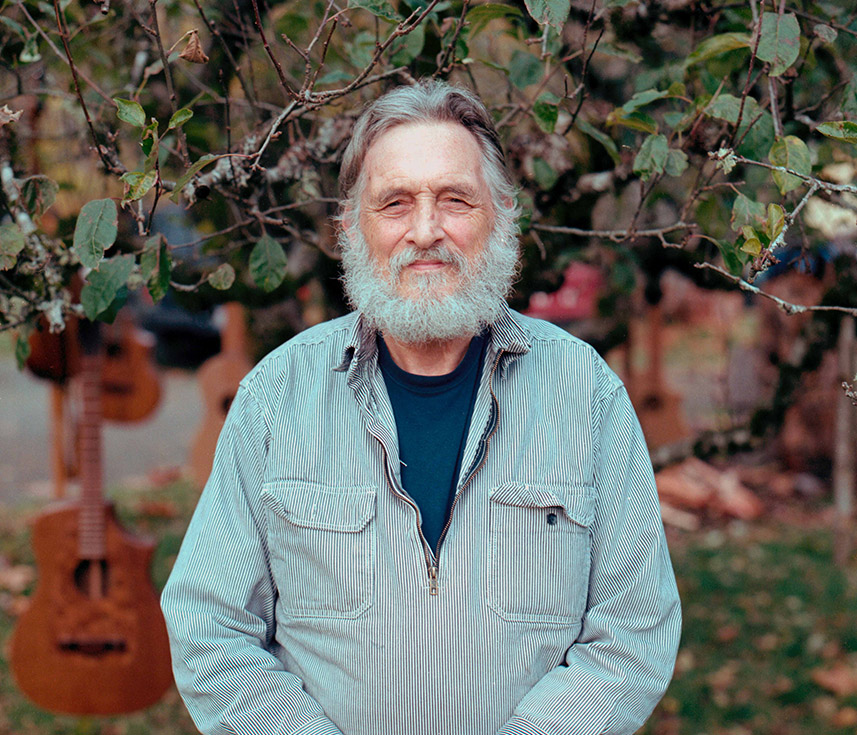 Dan McKinstry: A good instrument will teach you. I think you could sit it in your lap and watch television and it would teach you to play. A really great instrument practically will play itself. And that's what we're after.

Elaine Vradenburgh: Today we visit with DanMcKinstry, a luthier and musician. Dan was born in 1943 in Tacoma and grew up in the coast town of Aberdeen, about 50 miles west of Olympia. He’s been a part of the jug band and blues scene in the region since the 1970s and is celebrated for the beautiful handmade guitars and mandolins he crafts from locally sourced western redcedar. He’s known locally and affectionately as Mudcat. Here’s Dan.

Dan McKinstry: I played a nice mandolin down in the winter of 76’, 77’ in Key West, looking for mandolin on the east coast—to buy an old Gibson for 500 bucks, couldn't find one—and ended up spending months down in Key West. And this fella I met down there had an outrageously good Mexican made, he thought, mandolin. But while I was there, playing that extremely light musical instrument, I got thinking that I should make one of western redcedar.

When I moved back fromFlorida I moved out to North River, Washington. And the area between Aberdeen and North River, and maybe Raymond, is pinpointed as the premium spot for growing western red cedar on Earth planet. I've read it in books, I thought—Smith Creek actually was pointed out, and I thought well how many SmithCreeks are there. So when I came back I moved to Vesta Creek and sure enough, the people that were there, loggers and crewcuts and longhairs, lots of them were into cedar, more were into logging, but cedar because there was beaucoup cedar there.

But the stumps you could have just about parked a car on, they were so huge, and the spalt piles were sometimes 10 or 12 feet deep from where they'd been cut.

Elaine Vradenburgh: Western redcedar is inextricably linked to coastal culture, both indigenous and settler. Known as “tree of life” or” life giver” by the Coast Salish people because of its longevity and many uses, it can live for 1,500 years. The wood is ideal for making canoes, totem poles, and tools and the bark has been turned into rope, baskets, fishing nets, and traditional Salish hates. Settler communities on the coast prized its value for construction – for siding, shingles, decks – and  after over a century of logging, there is little left. Coastal musicians, like Dan, also saw its value in instrument-making and have tried to accumulate a back stock of blocks as the species dwindles.

Dan McKinstry: I came back in the winter of‘76, ‘77, I think it took me a couple months to make my first mandolin. And after that I lived on the creek there for half a dozen years or so, or five, and I was building about 10 instruments a year, no electricity. Vesta Creek was the running water, so there were no power tools. But the best cedar you could even imagine. A lot of it was 30 grains to an inch, which means if you got a big tree, why this is 4, 500 years old lots of times. And it's just not something you can find anywhere big this side of the redwoods. And I would get oh, sometimes only 20 or 30 blocks a year that were really quality enough to make mandolins of them. But I scotched them up, and I kept them, and some of the stuff I'm building with now are blocks that I've been packing around for forty years.

Elaine Vradenburgh: Dan sold his handmade instruments from his Aberdeen shop – Mudcat Music – for many years. He never intended for people to refer to him personally as Mudcat, but it stuck. The name refers to the Mississippi catfish, a scrappy, bottom feeder that survived some pretty intense pollution in the Mississippi river watersheds. Dan says that he doesn’t like big cities. He doesn’t even like electricity but he tolerates it. Dan moved to Olympia in the 90s and likes the small-town vibe and ethic of the musical community here.

Dan McKinstry: The reason I like playing clubs here, the primary reason that—besides that I really enjoy playing music—is that that's the way I sell instruments. Some old shake rat comes up and says “what's that?” and by the time you're through with your conversation with him between sets, some time he shows up at the shop and says, hey, build me one of those.

If you're in the music business for money, hit it. Hit it and get it, and do it while you're very young and very tough and willing to, you know, sleep in the back of a20-year-old vehicle while you travel around the country trying to sell yourCDs. And that's good experience too, especially if all band members are still talking to each other when you get back home.

I think lutherie is really a pretty luxurious job. If you're wood freak and you love making sawdust, why, that's what you get. But it might come with $11 an hour too, and all the sawdust you can eat.

It’s like marrying young.You're going to have kids or you're going to go out and make some money, probably not both at the same time. And so you got to check out where your values are. I come from mill people, everybody in the family at one time, accept for maybe my little sister Sheri, we all worked, even my mother and father met at Rainier Incorporated in Hoquiam and I spent five years of my life working the mill life, and this is just a whole giant step better.

And I love my job. My job here is to get the right instrument to the right player, and the concept is to make one of those guitars that last 100 years, and that's the status in it.

I just delivered a mandolin that got started but was deemed too small to be worthwhile—it got started 45 years ago, and it had been floating around the shop for a long time, and I delivered it last week. And they called me, and said, Wow, we're just having a really good time with your mandolin—Zoom call, I could hear it and see it getting played and it only took 45 years to build the thing.

Elaine Vradenburgh: The Third Thirty was produced by Window Seat Media in partnership withSenior Services for South Sound. It was a collaboration between Dan McKinstry, Clio Montgomery, who interviewed Dan, Molley Gillipse, who photographed Dan for our website and exhibit, Nick Rawson, who composed music for this story, SophiaMcLain, who transcribed Dan’s interview, and Amanda Mackison, who co-edited this story with me. Funding for this series was provided by The City ofOlympia, the Freas Foundation, and the Thurston County Heritage Grant program.To learn more about Window Seat Media and hear more stories, visit www.windowseatmedia.org. You can often find Mudcat performing at the Pig Bar and Rhythm and Rye in downtown Olympia.