"My faith provides a guide. I want to make sure that I never do anything to harm another person and I see every person as connected to me. And I'm wanting to help however I can. When I'm able to see every person as a part of my human family, then I respond to people in that way. It goes beyond just seeing a stranger. I’m seeing someone who is a part of me as well and so I have to reach out." 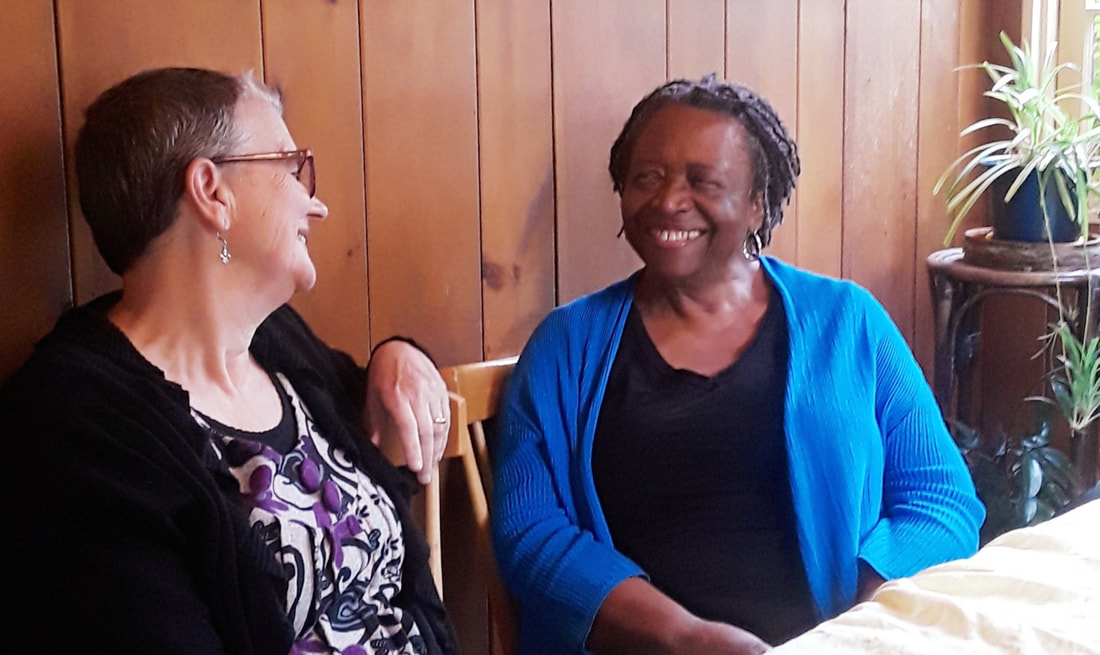 I have known Lonnie Locke for about 20 years. I really got to know her when she co-facilitated a 10-week Study Circle on Race for my theatre company, the Heartsparkle Players. That was an experience that helped our group to first, talk about race and then to be able to portray stories about race and racism with a more complex understanding.  Lonnie was born in Linden, Alabama. She came to Pasco, Washington 54 years ago. She has lived with her family in Lacey, Washington for the last 22 years.
​
-Debe Edden, Oral Historian

Being born African American, in 1946, in a very racially segregated environment really contributed to my longing to get to know people who didn't look like me and learn about customs and traditions different from my own.

What I saw or heard in that environment was that anyone who looked like me was inferior. I fought against that idea. Yet I internalized it. So I felt that I had to get to know people who did not look like me to prove that my being different did not mean that I was inferior.  I would not have been able to do that if I hadn't really pursued getting to know other people and comparing our humanness.

In 1964 I came to Washington State and started college. I was definitely a minority in that environment but I didn't have to sit in separate places or go to places that said colored or white. It was a chance for me to get to talk to someone who didn't look like me. To get a chance to talk one person to another in a more equal setting

I met my second husband after I left my job as Court Commissioner in Franklin county. We dedicated our interracial marriage to promoting the oneness of humankind and working on matters that bring people together.

In the early 90’s we, along with others, organized a group called Race Unity in Action. We met monthly with interested persons to share meals and talk.  That soon morphed into a group called the Friendly Supper Club. We met on the second Saturday of every month. Often there would be 25-50 people in our house sharing food and talking. We never knew who was going to be coming. Some of the participants helped to shape activities which became a tradition in the Friendly Supper Club. One dear friend, who is now deceased, was Tlingit from Alaska and noticed that not everyone greeted others. So he offered to teach what he called the friendship dance. Two lines were formed with people facing each other; then each person stated their name and shook hands with the person they were facing and then moved on to the next person until everyone had a chance to say hello.  I was amazed and so delighted to see friends and strangers who came to our house.  Many wonderful things happened in this gathering. An incident that stood out to me was a time when five women were sitting together at the dining table talking about their life experiences.  One woman was native, another was someone who had lived in the Southeast and had an interracial marriage; another person was a biologist; one was a white woman who was trying to adopt an African American child; and another was homeless. They were talking about women's issues. It was so heartwarming to hear them talk about things that affected their lives, and to see the commonality they had regardless of their particular life situations. It was those types of things that caused my husband and me to feel honored to be able to offer our home to the community for about 15 years.

Faith has always been a part of my life.  When I was growing up in the Southeast it was what kept me going.
​
When I first began to become conscious of being a spiritual person it was my faith that helped me. When I was about 15 I went to the police station because I wanted to do a report on accidents in our area. I asked if I could speak to a police officer when this officer came out the first thing he said was, “What do you want, girl?” and pushes me against the wall. I think it was part of my faith that helped me stay calm and able to talk to him without losing that calmness. And where I could reach for what was to me at a higher level of thinking. That's what faith does. It allows us to reach for that thing that's higher and not go to the lower nature there in all of us.  I could see that when I chose not to reach what I thought was lowness then he was able to calm down and to actually provide me with what I'd come there for in the first place.

I try to make a habit of calling myself to account each day and thinking whenever I decide to do something,” Is this the right thing to do?” My faith provides a guide. I want to make sure that I never do anything to harm another person and I see every person as connected to me. And I'm wanting to help however I can. When I'm able to see every person as a part of my human family, then I respond to people in that way. It goes beyond just seeing a stranger. I’m seeing someone who is a part of me as well and so I have to reach out.

I've made it my goal every day to try and look in the face of people that I see and smile. The majority of time people smile back and I feel that connection between us. For someone who has come from being separate and not being able to look into the eyes of other people and smile at them and get to know them. It feels like I've reached this wonderful milestone. I'm happy that at this time of my life that I can do that and that as I reach the other side of my life to really begin to develop that part of me.