"I think there's a way of living where if you just keep your heart open, opportunities to act come to you. I certainly never intended specifically to be an advocate for homeless people; that opportunity just revealed itself to me." 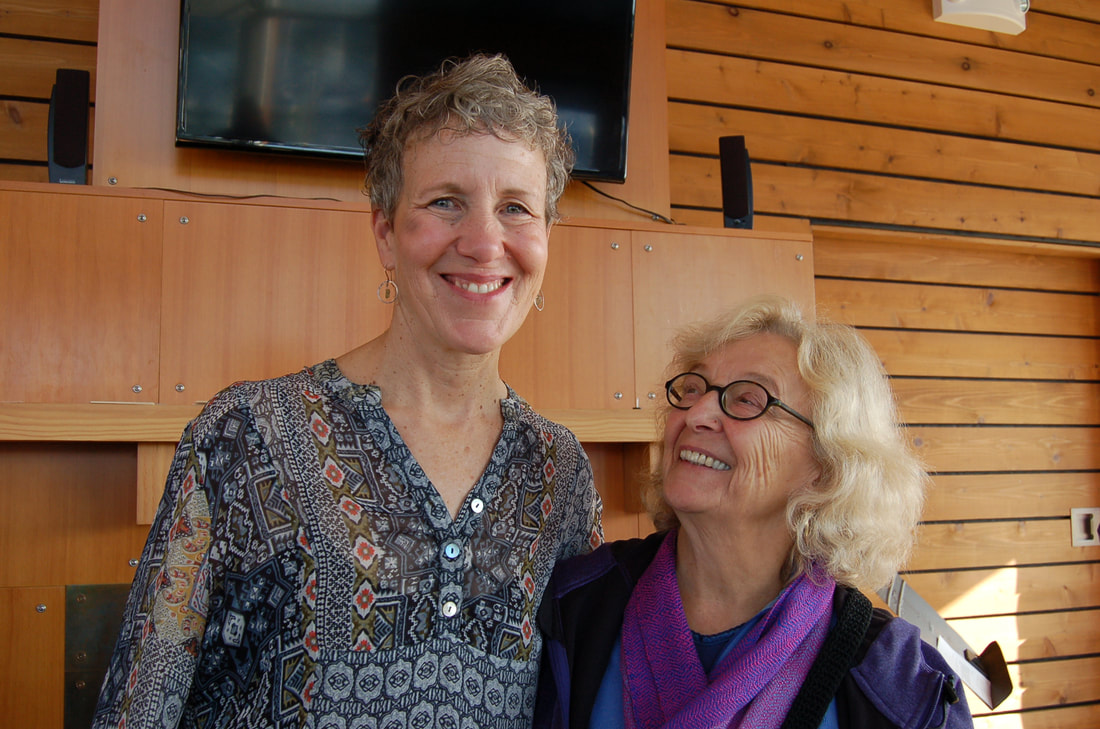 Jill Severn is a writer and community activist, known in Olympia for her work for and with Quixote Village, a tiny home village that opened in 2013 specifically for people experiencing homelessness. Following are excerpts from my interview with Jill at her home in Olympia on Monday, October 15, 2018.

I think of myself as being a community-minded person. And especially now, I feel as if the local community is where we keep democracy alive; that the reservoir of democracy is at the local level.

In the fifth grade, we learned about democracy and about the founding of the United Nations. And I just fell in love with that idea that each of us has a responsibility, each of us has power in a democratic society.

I went to college for one quarter. I escaped from my family and came to Seattle to go to the UW. I went there for one quarter, felt completely out of place – I’m from a very low-income family and I just didn’t feel like I belonged there. And also the war in Vietnam was going on – it was 1965. I thought it was more important to work to end the war and to participate in the civil rights movement than it was to go to college.

My first career was as a journalist in Seattle, and most of my jobs have been writing jobs. I worked for the legislature, and I worked for Booth Gardner when he was governor, as a speech writer. And I did a lot of contracts for state agencies. When I turned 62, made my last house payment, I retired. I’m sort of in this twilight of retirement where I still actually do freelance writing projects when they come my way.

I started volunteering at Camp Quixote in May of 2008. They needed people to do host shifts for three-hour stints, so I scheduled my shift for Saturday mornings from six to nine a.m. And I just fell in love with the camp and the people there.

The camp residents met every Sunday night to manage camp business, and the church would make a dinner for them before the meeting. I showed up with a food donation, and I was actually surprised that they let the volunteers stay for the camp meeting.

The first meeting that I went to, the big decision they had to make was whether to evict this woman who was very mentally ill. She had two pit bulls in the camp that were threatening other people, and there were issues about camp safety because of these pit bulls. They really struggled with that decision because they knew this woman would be very vulnerable if they evicted her, but they finally decided they really had to evict her because of the safety of everybody in the camp. They decided to make a safety plan for her, to help move her tent to the woods nearby where they could keep an eye on her and sort of make sure that she remained as safe as they could make her.

It was just a profoundly moving conversation about mental illness and vulnerability. I didn't say a word but it went exactly back to the democracy part of me. Here was this beat-up, traumatized group of people practicing democracy at this very basic level and dealing with the most fundamental question, which is the well-being of an individual versus the survival of the community. I was hooked.  It was the self-governing function in the camp that really hooked me more than anything else - that this was democracy at absolutely ground zero.

Before the term “tiny house” was in currency, the Camp Quixote members had this idea that they each wanted their own tiny cabin and a community building that would have a kitchen and laundry facilities and showers.

And I just thought, we really have to do that, because it's a great idea. So I just started talking to everybody that I ever knew about this great idea and how we could do that. I had the great fortune of having worked for the legislature and knowing people who still serve in the legislature. I like to cook, so I would invite people over for dinner and pour some wine. And that resulted in us getting our first big financial contribution, which was a million and a half dollars in the State Capital Budget.

And money attracts money. We talked the county into leasing us land for $1 a year.

Camp Quixote was a camp for seven years. Hundreds and hundreds of people had volunteered there, and gotten to know people who are homeless. So then it wasn't just about the homeless, it was about people who are homeless, who are our neighbors. I mean, it was transformative, that people created those relationships. It was transformative for the campers too, many of whom never had had a middle-class friend.
So when we needed to pack a city council meeting or a county commission meeting or a state legislative hearing, which we also did, we could do that on 24-hours notice, and when politicians see 30 homeless people show up with 120 middle class allies it was impossible for them to say no to us. I think all of that had a kind of magic about it.

I think the best of Olympia is actually under a bit of a threat. The best of Olympia to me is its kind of ideological diversity. We have a strong progressive movement. We also have a strong, and I think very humane, small business community downtown, particularly. I really have come to appreciate how necessary it is to have that ideological diversity and to be able to work with that and see the strengths in different positions.
I've been wanting to write more about homelessness because I think it is such a big issue. And relatively few people have much understanding of it. I think there are a lot of good-hearted people who can't see past the miasma of homelessness to see the people.

I never wanted to be and don't think of myself as a single-issue person. I've always wanted to do more about environmental protection and climate change. So I'm always kind of looking for opportunities to engage in that world.
​
I think there's a way of living where if you just keep your heart open, opportunities to act come to you. I certainly never intended specifically to be an advocate for homeless people; that opportunity just revealed itself to me.