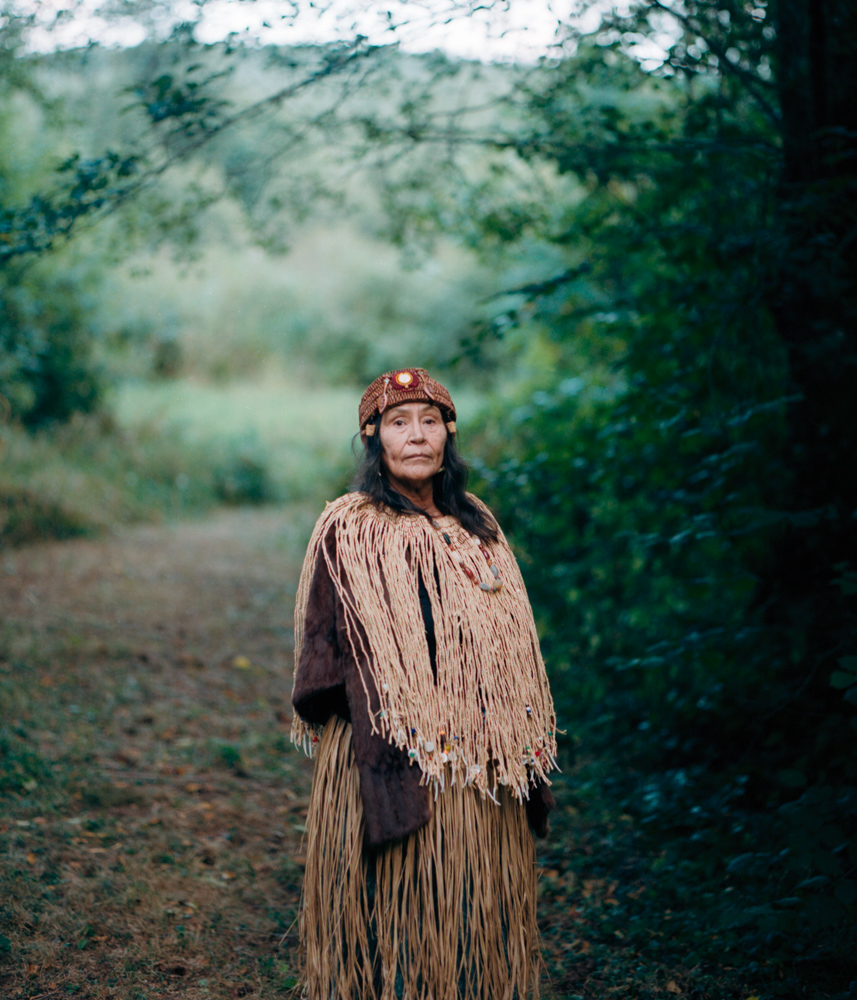 Harvest Moon: I've been storytelling for over three and a half decades. And I really do believe that now is my time. And I can stand up tall, and really give out my 110%.

Elaine Vradenburgh: Today we visit with Quinault elder Harvest Moon. She is storyteller and weaver and has been honing her craft for decades. She also loves to act and has appeared in television and movies for almost as long. But it is her gift of storytelling that she holds closest to her heart.Harvest was born into the foster care system. She grew up in Olympia in the1960s with her adopted family. Her adopted parents were Polish and German, her biological parents were Quinault and Hoh River. The weaving together of those stories was at the heart of our conversation. Here’s Harvest.

Harvest Moon: My birth name was Stephanie Elaine Culty. And then on a little scribbled piece of paper, my grandfather had written down that my adult name was Harvest Moon, specifically because I was born on a full moon. And the Quinault Tribe had harvested a large amount of salmon that year. And so he scribbled Harvest Moon down on a piece of paper and gave it to a caseworker. At that time I was in foster care and in the process of being adopted into a beautiful family that had a wonderful home inWest Olympia. And I went from Stephanie Elaine Culty to Dorothy Ellen Rosina.

My parents loved children. The whole neighborhood was always around there. So they had already adopted my older brother David. He was actually half Black and half White. And then I came into the scene. I was just a little over a year and a half, I believe when I came to Olympia. They knew that I was special. I think it was the dimples and the smile and the wanting to learn from everyone.

And it was such a wonderful life that when I fell in love and had my four sons, I tried to raise them the way that my parents taught. Show me what real love was about.

WhenI started my menstrual cycle was when my German mother, her name was Ida, shared with me on a piece of paper, the paper that my grandfather wrote, “When she starts her menstrual cycle, let her know that her Native name is HarvestMoon.”

I had gotten married at 17 and had my oldest son at 19. It was after I gave birth to my first son that the pediatrician asked, “Do you have diabetes? Or what's your past in your history of your family?” I go, “I don't know, I was adopted out.” And holding my son in my arms and wanting to-- Really now, all my years of life wondering, you know, what happened to my parents? What really, really happened?

I think what makes up a Harvest Moon is two different people in reality. After I had children and grew up and started teaching the Native culture, and doing my artwork as a basket maker, I didn't want to hurt their feelings. I love the name Dorothy, and I love the name Stephanie, but then I realized that, you know, Harvest Moon really meant something to me. The half-moon is Dorothy, and the other half is Stephanie. You put the two halves together, and that makes the Harvest Moon.

And to actually see to actually see that I'm Quinault and then I was Hoh River. But to realize that the storytelling and the basket making was in my blood.  And I know for a fact that it was inherited. It was meant to be. My great uncle was a beautiful storyteller. My biological father was a wonderful public speaker. He was also a wonderful artist. My mother was very bright and beautiful woman who could conquer and do whatever she wanted to do in her life. My parents told me that whatever you want to be, you can be. It's just going to take a lot of work. And that's exactly what I did.  I just focused on Quinault culture. And I used to even pretend I was a teacher and so I was really surprised to come about to be a teacher and touch so many children throughout their lives.

The storytellers captivate the audience with ears that are open. I believe, even though you think that I'm a storyteller, I talk a lot, but in reality, I listen. And listening in this day and age is very rare. It's almost as rare as seeing a Bigfoot. It takes a long time for that earwax to get loosened up in there. So I want to really let people really hear for the first time.

Each time I tell a story, I learned to do it in a different way. And so many people don't realize that when I tell stories, I'm not up there just saying it for the first time. You can ask my dog. I mean, I practice my stories over and over and over again. In order to get it to the point where I know it will be a hit.

My heart, my mind, my soul, is my totem pole. And believe me, my totem pole as a storyteller began with a lotta, ‘um,’ and ‘long ago,’ and ‘um, that was a longtime ago.’ [laughter]

Oh,I'm looking forward to hearing some beautiful new generation of storytellers,  young, old. Just bring forth every possibility. Sharpen those tools and get that cranium going and be who you really are, and see who you are. A storyteller is a doctor. A storyteller is a nurse. A storyteller’s a fireman. We all have our stories to be told. And that's what will make a better future.

My friend Laura Player gifted me a song that went like this.

And it means I walk in beauty. I see of beauty. And I tell of beauty.

Elaine Vradenburgh: The Third Thirty was produced by Window Seat Media. It was a collaboration between Harvest Moon, Ava McGee, who interviewed Harvest Moon, Molley Gillipsie, who photographed Harvest Moon for our website and exhibit, Benji Santos who composed music for this story, and Amanda Mackison who edited this story with me. Funding for this series was provided byThe City of Olympia, the Freas Foundation, and the Thurston County HeritageGrant program. To learn more about Window Seat Media and hear more stories, visit www.windowseatmedia.org.