"I learned how to listen to people. I learned how important it is that people need to be touched. I don't necessarily mean physically, but they need to have their story heard, or their emotions honored. I think that has carried me a through a lot of situations." 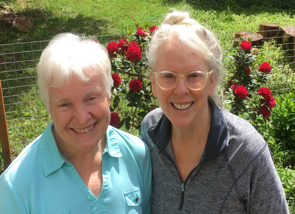 I met with Annie in her home in her den. I could view the slope of her back lawn through the large windows behind her. Flowering trees and shade trees offered sunlight through the branches. I could hear the birds in the background through her open window. - Martha Worcester, Oral Historian

I learned how to listen to people. I learned how important it is that people need to be touched. I don't necessarily mean physically, but they need to have their story heard, or their emotions honored. I think that has carried me a through a lot of situations.

‍
I was born in Havre, Montana in 1952. My parents met in college and, and came to Havre to start their career, their family. So that time affected a lot of things. My dad took a job teaching sciences and gradually worked up to head of the science department. It's currently named after him now.  Mom  told  me  she couldn't get hired at the college, because jobs like that needed to be reserved for men who are supporting their families. So even though she had the same education and experience, she was not offered a job. So she had a series of part time jobs one as a chemist at a dairy.  She had several political positions. She served in the legislature, county commissioner, head of the Montana Historical Society, on and on and on. I think those things affected how I saw myself as a young girl growing up. With 3 boys and myself, Mom said she remembered, I was way worse to raise than any of the boys.

‍
She had her garden. We grew up entirely on wild meat, either deer, antelope, a lot of game birds and fish. It was a big part of our life - hunting and fishing, and gardening. Although I didn't really like it as a kid. Now, I love it.

‍
My mom was the head of the school board. At one time, I was both on the A list and the F list. The classes I loved, I just put my heart into, gave it everything. So I’d get an A. But the classes I couldn't do, like algebra, I would get an F in and I would give it no energy. I had no use for it. I was obnoxious in the classes. People liked to be in class with me because I was a troublemaker and fun to be around for the most part, which of course, my mother took no pride in.

‍
I learned to get along with people. most likely to get along with everyone. Being somewhat of a troublemaker, and not belonging to a particular click, kind of floating between them, put me in that position. I also learned from my parents how to listen to people. I learned how important it is that people need to be touched, and I don't necessarily mean physically, but they need to have their story heard, or their emotions honored or. That has carried me a lot through a lot of situations. I recognized early on that it was doing that was important. It carried over a to a lot of my kinds of work.

‍
I like to find ways to think differently, to challenge myself, not physically necessarily. My relationship with my three daughters. I've noticed a change that they're smarter than me now. And that's a good thing. They have different perspectives on things that are astonishing.

‍
I'm very involved in thinking about the environment. You know, the saying that humans are really kind of a cancer on earth. You know, we've taken over and destroyed so much and I've said that and thought about it. And she said, “Mom, you need to think about that differently. You need to think about humans as being caretakers of the earth.” And I just loved that reframe. It’s just so it's wonderful to be around young people who think about things in different ways. I don't know that they're always welcome on their end.

‍
I went through a lot of phases of what I call to my wild life, when I was hitchhiking, took some drugs and really experimented with life - back to the land kind of thing. We lived in this sort of commune. We had a rope swing that went over a cliff . It was wildly exhilarating. Because if you fell off that rope, you would die, and I loved that. Once I became pregnant, I never did it again. It completely changed the trajectory of my life. When my second was born, she was intensely vulnerable. The things that go along with kids had an enormous influence on who I am. My whole career was around early learning because I think it's so important.

‍
I learned how important honesty is how important kindness is and how important contributing to your community is. That you're really not an individual, you're part of a community. We're all cogs in some things. You know, you're not the boss. I think that was always really important to me. Don't assume that people know what you know. Never set yourself apart. Relationships are critical.

‍
I also recognized that I may not ever really understand. I mean, I hate it when people say, Oh, I know just how you feel, because you don't. You know, you can try but you just you won't have the same gut feeling, or historical perspective or experiences or something. I mean, we can try but it’s not really possible to fully understand somebody from another culture.

‍
My best friend in high school turned out to be gay, which didn't surprise me at all. And I adored him. He and I were in theater together. I guess I've always been really curious about people, and what makes them tick and understanding them and how to be a friend to them.

‍
It’s really only in the last few years that I've really recognized the white privilege question. Even though we didn't have a lot of money. My dad was a college teacher. I always felt like we were well respected in the community, and there were high expectations for us, and there were opportunities for us.

‍
I used to say, I can always get a job.  I didn't realize it was white privilege that made me think I could always get a job. I mean, I'm white, I can pass for being intelligent, or, I can carry myself in such a way that people will have confidence in me. I realized that not everybody has that kind of background and it's able to. We spent many, many hours and days and whatnot, driving around in our four-wheel drive across fields, looking for the first spring flowers, identifying insects looking for dinosaur bones, trying to dig for fossils, try you know. We did a lot of family kinds of things like that on an ongoing kind of basis. There wasn't like you could stay at home. So things like that.

‍
I had a relationship with a man who moved here from Jamaica.  There were things that were just so dramatically different. We had really different values. He did not want to do outdoor things. He would say things like” black people don't ski, or black people don't hike.” Just things like that. That I didn't understand, and he didn't understand. That affected me.
When I was working for the state, I was a supervisor, and really embraced the idea that we needed to have diversity. We hired a woman who was black, a perfectly wonderful person very capable. It was really hard for her. You know, I can't I can't say that enough. We would walk into a room and she would hold my arm and say, “there's nobody else here of color.” Or sometimes we would take a trip, to a conference and she would be afraid to get out of the car. I mean, I didn't know that somebody felt that way. I couldn't identify with that. So I learned from her.

‍
Be creative. Look for new ways of seeing things. Always be curious. Find ways to think outside the bowl. Try to make the world a better place.

‍
Love people with your whole heart  but, let other people love you. Because I think sometimes that's hard to do. Embrace people and assume the best about them. That's something that I think has been a really positive characteristic in my life . It’s that even people who other people don’t like; I usually can find a way to like. I’ve made a point of doing that, of trying to figure out what's likable, how they can be included. I think of the Winnie the Pooh character, the chronically depressed character - Eyore. They’d invite him to every party anyway. We should all do that. I used to think this when I was working in early learning, the kids that are the most difficult ones need you the most. Kids who are sweet and easy and fun, they're going to be fine. But that troubled child, who you can’t hardly stand, this is the one you really need to focus on. And that's true in the office, in public service - in all kinds of places.

‍
How do I want to be remembered? As ‘a deeply flawed person who embraces challenges and loves life’. A long time ago, I saw a thing on TV. They showed a picture of the statue, it was like a Greek statue or something, and the arm was broken off of it. And the interviewer said, you know, it's too bad that happened. And the guy said, that's what I love her for. And I just thought about that. And it made me think that that's how we need to be. We need to love people for their flaws, too. Because we're all flawed. (laughter).